Learning about earthquakes with Reading University 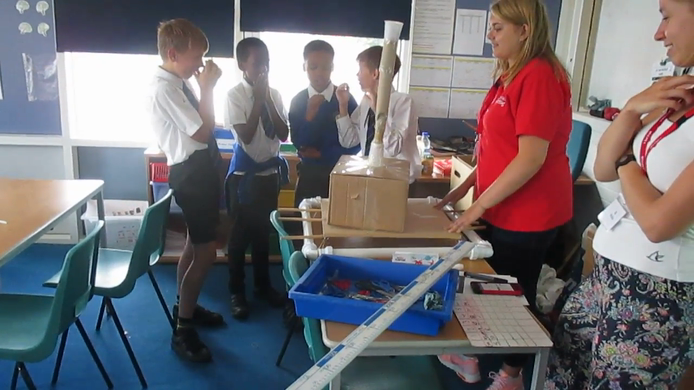 Year 6 will extend their knowledge of forces with a review of the work of Sir Isaac Newton.  They will be learning about Newton's Laws of Motion and building on their experience through a series of experiments to demonstrate the fundamental concepts. Through this work, pupils will acquire a deeper understanding of gravity and will be able to explain that unsupported objects fall towards the Earth because of the force of gravity acting between the Earth and the falling object.

Following the work of Sir Isaac Newton, we built refracting telescopes to help understand what led him to try and build something better.  We observed how a refracting telescope works by using three different coloured light sources and discussing what happened to the light beams when they passed through bi-convex lens.  This also helped us understand how one lens needs to be moved closer to or away from the other lens to focus the light.

After this, we built refracting telescopes from two lens with different magnifications and focal lengths. Using these telescopes, we were able to observe how the focussed image was upside down and surrounded by a rainbow halo.

This experience led Newton to invent the reflecting telescope; a design  that is still in use today.

This term we will be investigating electricity and electronic circuits.  We will:

Further, we will investigate and apply our knowledge to the generation of electricity using renewable energy sources, understanding that movement and other forms of energy can be converted in to electricity.

Creating cells from combinations of metals

Children learnt about the competing theories of Luigi Galvani (1780) and Alessandro Volta (1800).  Had Galvani discovered 'animal electricity' or had Volta discovered that electricity is generated by different metals in a solution?

The children worked systematically to test combinations of metals and liquids (lemon juice, vinegar and salt water) and recorded their results in a way that other scientists could repeat their experiments.

Using knowledge of circuits to build a 'steady hand game'